There’s nothing quite like visiting the Hampton Court Palace Flower Show to find some garden inspiration. It’s the largest of its kind and this year, zoning was introduced to make it even easier for the likes of you and me to navigate our way around the 34 acres. Each zone had its own theme of either Escape, Inspire or Grow and I loved the Escape and Inspire sections equally – mainly for their show and summer gardens! Here’s a recap of my favourite attractions. 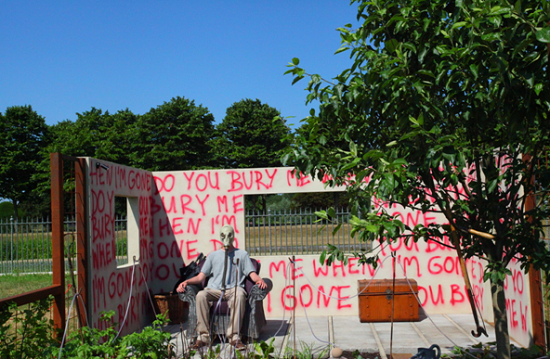 This is a garden that truly stands out from the rest. Mainly because there’s a human sitting amongst the rectangular design, breathing through a gas mask. Inspired by the Metallica song, I Disappear, the garden demonstrates how we can support ourselves through growing our own crops. At the same time, we’ll be purifying the air. Red graffiti illustrates disappointment and reflects some of the anger directed at new build homes making use of land that could be used for growing. To keep the garden enthusiast happy, there are plenty of climbing vegetables, fruit trees and a vegetable plot. 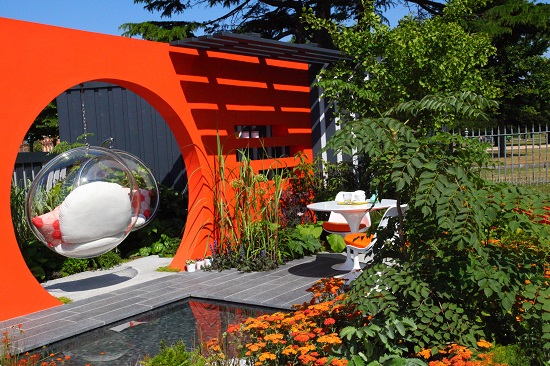 Amongst all the greenery, the bright, orange tones of this garden jump out. There was a sense of nostalgia that surrounded the space and it made sense upon learning that a 1950’s poster inspired its design. Created on a budget of £15,000, the low cost, high impact garden does a brilliant job of showing us that you can design to suit every budget. When we think of an era, we tend to think that replicating the look will be an expensive task but that’s not always the case. Garden necessities are covered with an eating and seating area provided for amongst a mixture of shrubs, perennials, grasses and low growing plants. The plant list is impressive too. You’ll find 10 different shrubs, 17 perennials, 4 grasses and 7 low growing. 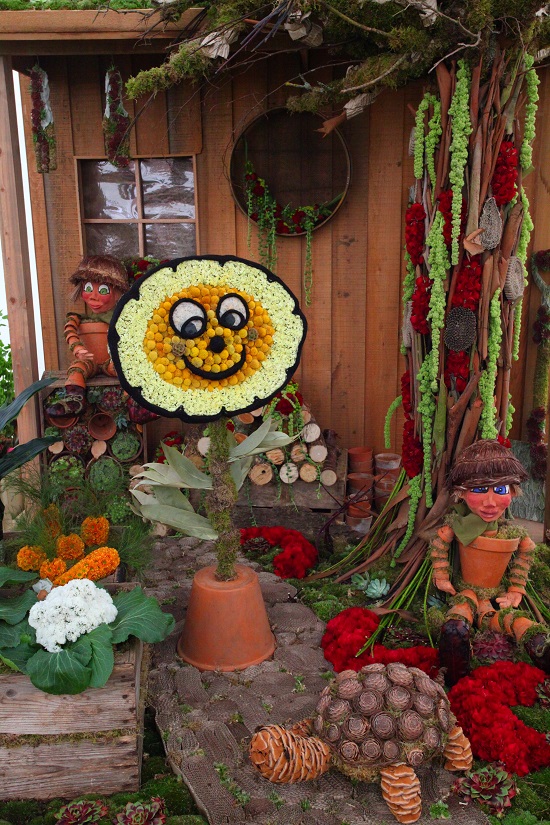 Tucked away in the Roses and Floristry Vintage Festival was this Silver-Gilt Flora winner. Students of Hadlow College had the vintage theme covered with their nod to a much loved British television show – The Flower Pot Men. Since it’s the 60th anniversary of its original broadcasting date, the timing couldn’t be better. I loved them for the colour and the spirit that they brought to Hampton Court and for showing that flowers can be works of art. Bill and Ben are made from terracotta pots with the Plagiothecium undulatum moss. Their hats are covered with Raffia and their boots are the work of preserved Magnolia leaves. Slow coach the tortoise hasn’t been forgotten either. You’ll find him as the work of Atlas cedar cones. 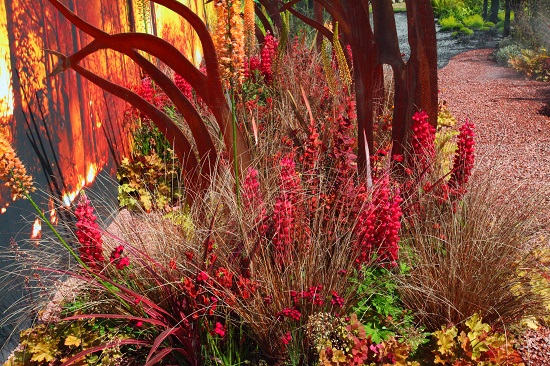 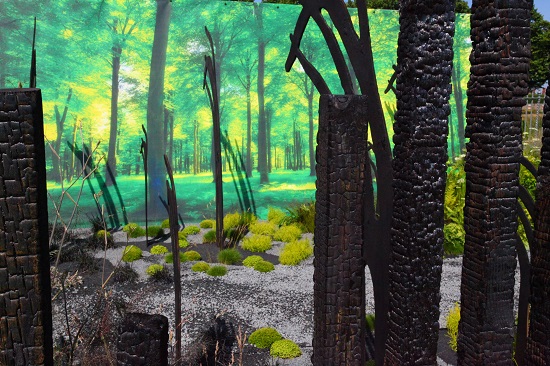 If you like The Hobbit, you’ll like Catherine’s garden as she’s named the upcoming film The Desolation of Smaug, as her creative stimulation. The two stages of forest fires – desolation and regeneration are captured through sculptures and careful application of the red and green palettes. It’s also one of the few gardens that you can walk through. There are red plants and sculptures to reflect the desolation and that’s heightened through the audio track playing the sounds of a fire taking hold. On the regeneration side, you’ve got the concept of new life seeping out through the lush, green plants dotted amongst the burnt sculptures. This time, the sound of nature with birds singing drives the message home. 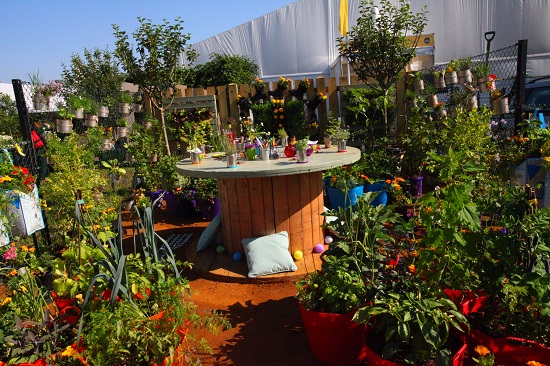 This summer garden is a true celebration of colour and has been designed with army wives in mind. Its selling point were the multiple plants grown in containers – to make transportation easy in the case of moving home. I liked the fact that the renter could benefit from the design solution. With a higher likelihood of moving property in the future, the modern day renter may be afraid to put their own stamp on a garden out of fear of putting their hard work to waste. With a garden like this, there wouldn’t be a problem.

The Hampton Court Palace Flower Show runs until the 14th July 2013. Check out the official website of the RHS for more information. If you’re inspired by what you’ve read (or what you go to see!), post your job here and up to three local gardeners will get in touch to help you create your own show garden. 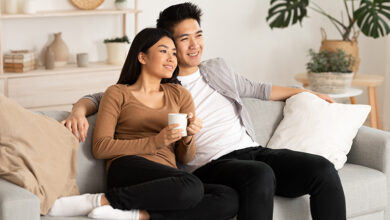 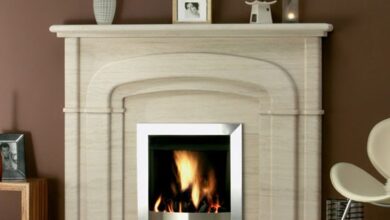 Choosing and Installing a Fireplace 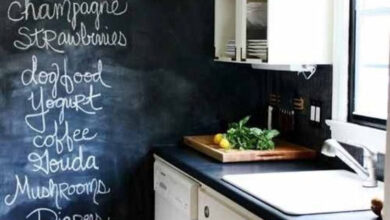 Water efficiency in the home