To save on space, homes are now being built to be smaller than ever and we’re constantly looking for smart space-saving solutions to make our properties appear bigger and airier. Some designers have taken things to the extreme in a bid to be revolutionary. We’re not talking skimming off a few inches from the side of our homes but drastically downsizing. The fascination with these properties comes with wondering how anybody could accommodate for so much in a space that’s so small.

The world’s smallest home is believed to be the Quay House in Conwy, Wales. The flooring measures out at 10ft x 6ft and the floor to ceiling height stands at 10ft 2in. While its original owner, Robert Jones, lived there happily until 1990, he was eventually ordered to move out when the house was declared to be unfit for human habitation by the council. Now, although the home is still owned by Robert’s relatives, it has instead become a fun local attraction which you can enter for £1.00. 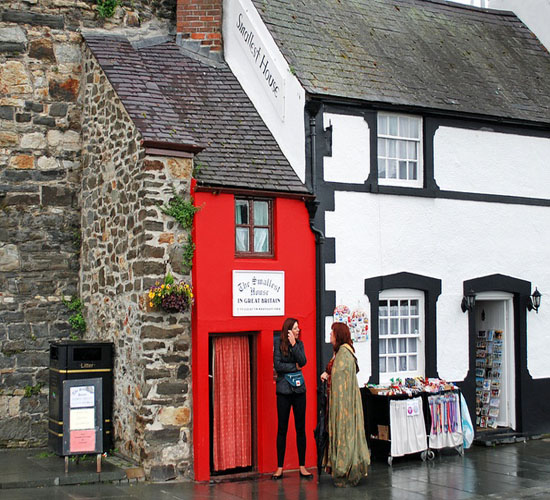 As unique as the Quay House is, it’s no longer a residence so I’ve selected the pick of the world’s smallest homes for you to marvel over below. Don’t worry, they aren’t common place (yet!) but you can’t help but admire them for their novelty value. If nothing else, they prove that you can create a livable home in the tightest of areas.

Polish architect Jakub Szczesny of Centrala Architects built his 46 sq.ft apartment for Etgar Keret in an alleyway between two buildings in Warsaw, Poland. At just 5ft wide, it hardly makes a dent on the ground below and measures just 48in at its widest point and 28in at its narrowest. Why build a home so small? Etgar wanted to pay tribute to his parents’ family who died in cramped conditions in the largest of all the Jewish ghettos, The Warsaw Ghetto.

You’ll find a kitchen, dining room, bathroom and a bedroom, complete with a single bed. I just hope you’re not thirsty as the fridge only has room for two bottles! Other downsides include no windows, giving you a shortage of natural light, and a shower that’s so small, it sits over the toilet. As innovative as it is, I’m not sure I could live in a windowless building – could you? 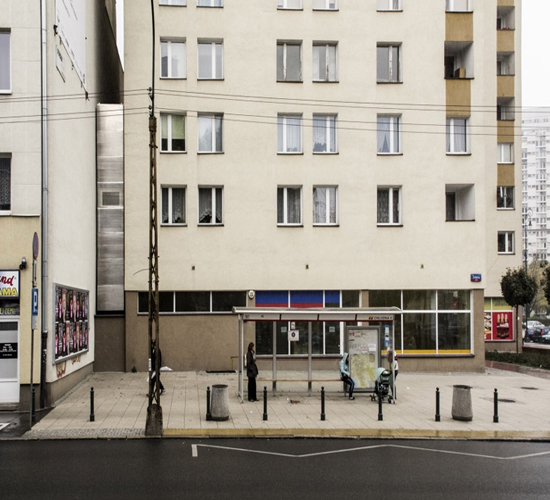 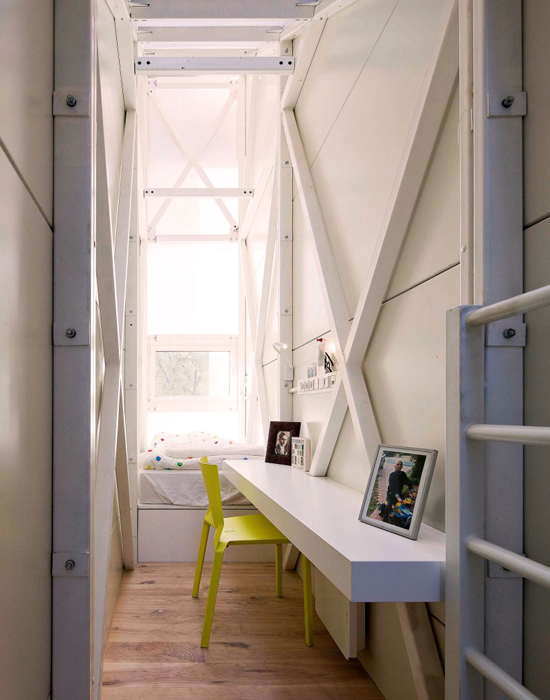 At 316 sq.ft, you’ll find this Polish apartment in Wroclaw. Its main selling point is its clever use of a semi-mezzanine level, whereby the owners get the benefit of an additional level, despite there being no space to fit a traditional, average sized second floor. With a ceiling that’s just 12ft tall, the second floor is home to the only possible room – the bedroom – where you can spend most of your time lying down to avoid the ceiling! The bed sits above the wardrobe and it can be accessed via a wooden staircase. To maximise inches, a separate kitchen and dining room has been discarded to make way for a kitchen diner. An extra (non-opening) door has also been installed on a wall to open up the space through giving the impression that there’s more room than there actually is. 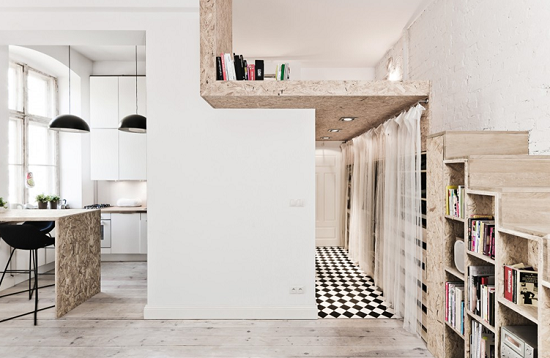 Designer Robin Falck has designed a home so small that it didn’t even need a permit to be built in Finland. According to Finnish law, buildings that are smaller than 96 or 128 sq.ft (location dependent) can be built without permission and Falck’s just reaches that 96 mark. The home’s name is an insight into its conception. In Italian, it stands for “birds nest” – and Robin aimed to build a get-away home that would make use of local and recycled materials to ensure that he did no damage to nature whilst working.

The building process created a two storey property with a lounge and small kitchen on the first floor and a loft bedroom on the second floor. We’re not talking a traditional large loft bedroom here but a bedroom that takes on all the functionalities of a loft. Picture a bedroom being used for storage space as well as providing you with a place to relax and sleep at night! The angled window lets in a lot of natural light but the sacrifice comes with a lack of washing facilities and for me, this is key. You won’t find a bathroom lurking around a corner or up a level and I would have expected this to be incorporated into the £6,303 cost of building. 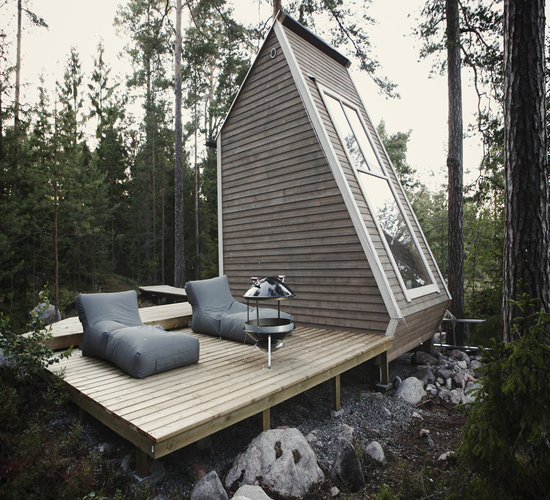 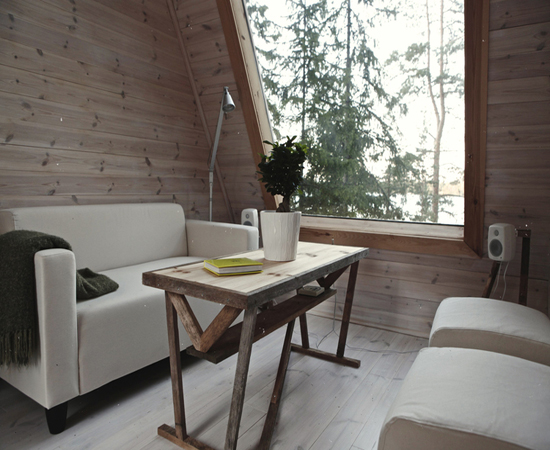 Japanese designers are well known for working wonders with limited space. Tetsuo Kondo Architects have widened the boundaries of design, in one of the most impressive designs to date. It’s my favourite pick and most of all, I love how this is designed to be a family home, rather than a temporary one or two bedroom apartment. From the inside the house looks spacious, but in reality, it’s all an impression created by paying attention to flow as the property is constructed over 964 sq.feet. On paper, it may appear larger than other small homes but taking into account that it’s a family space rather than a one or two bedroom property, it’s noticeably smaller. The average floor space per person in Japan is 377 sq.ft – meaning you would be looking for 1508 sq.feet for a family of four.

There are very few divider screens used, each room has light coloured walls (to reflect light) and different rooms are located on different floors – all of which contribute to creating that open, nonrestrictive environment. A long dining table is surrounded by plenty of clearance space and there’s also plenty of space for seating, whether that’s a chair or a sofa. Unlike the Keret House, glass is used via sliding doors to make sure that enough air and light can enter the property. 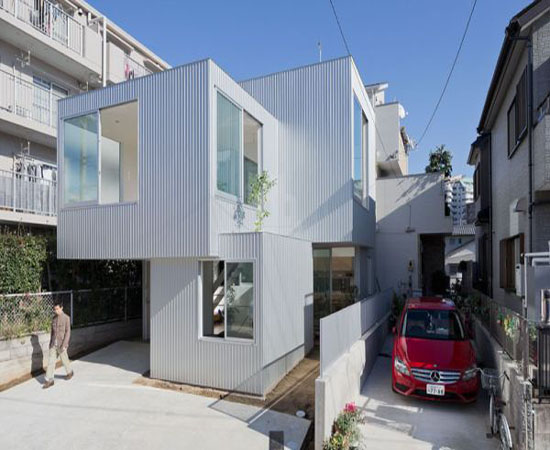 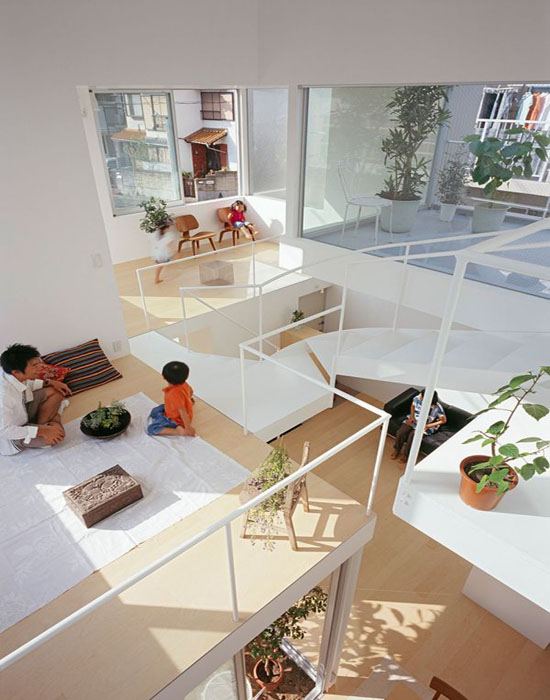 In a cheeky nod to the architects’ former work building (the red light district!), Pieter Peerlings and Silvia Martens from Sculpt (It) have designed a glowing, illuminated property in Belgium that spans 7 ft 10in, 645 sq. ft. Rather than build outwards and take up floor space, the designers have made like others before them and built upwards where the sky’s the limit (plus the local building regulations of course).

Four floors reside within steel walls and leave the homeowners permanently on display as both the front and rear facing walls are made entirely of glass. It’s a clever technique as it shows us what space we really need beyond our solid walls and gives us an insight into how we can really make the most of what we have. Upon entering the front door, you can work on the ground floor, take your meals on the first floor, relax on the second and sleep on the third – oh and take a bath on the fourth as you head to the roof and look out upon the city lights. 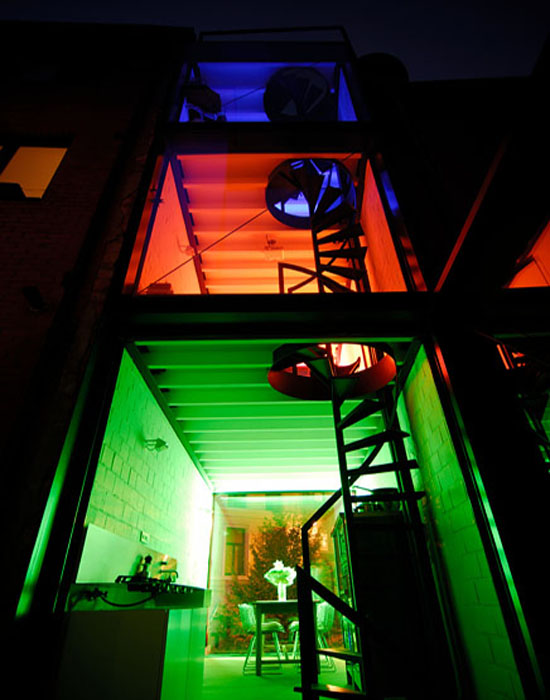 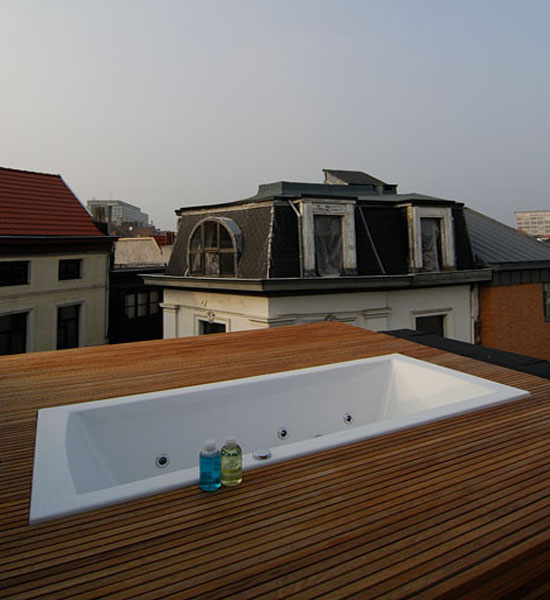 With each property making different use of space – whether that involves sacrificing windows, building a semi-mezzanine level or neglecting to incorporate a bathroom – there are definitely improvements to be made on all accounts. However, uniting the properties is the designer’s or architect’s clever decision to build up rather than out and a tendency to decorate with light colours, avoiding fussy patterns, in order to avoid visually shrinking the space. 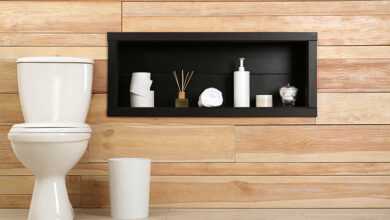 How to plan for a bathroom niche 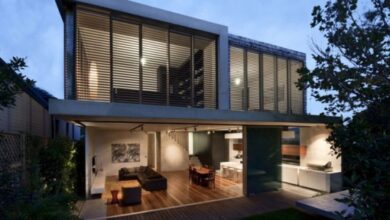 Top five: How to add extra space to your home 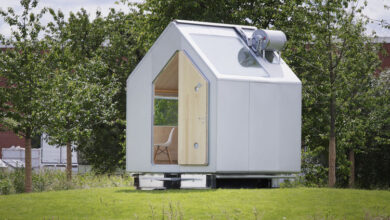 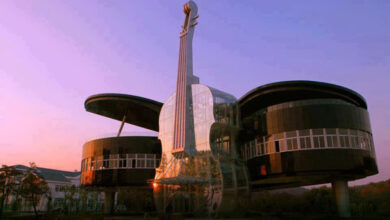 Buildings with nick-names – can you tell what it is yet?