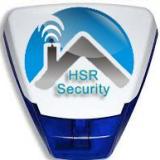 11 ratings
Get A Quote

At HSR Security we offer a friendly, professional, reliable and affordable service using a range of fully approved burglar and CCTV systems to suit domestic and commercial sectors.

HSR turned up on time and carried out works to the price as agreed on the phone. HSR installed a motion sensor to the front door rather than replacing the contact sensor at no extra cost. HSR also agreed to install a further two motion sensors for a good price and continued until the job was complete, even though it took a lot longer than they had originally anticipated. I would recommend.

Raymond got on with the job straight away, gave us clear and precise information. After the engineer had left I needed to clarify a few points with the alarm system. Raymond was happy to answer all my questions over the telephone. We were very happy with the quality and value of the service. We would use HSR Security again.

Very prompt response to initial enquiry , quoted price accepted as was very reasonable, engineer arrived at the arranged time and conducted a thorough examination of the faults and corrected them and left the alarm serviced and in full working condition. Would recommend

HSR were brilliant especially Raymond Lee the Engineer. The system needed a replacement battery but he also checked the whole system over, fixed a dud PIR and even made some tweaks to the volume levels to our preference going that extra yard. Nice guy too. Not the cheapest but hey it was a Sunday and all sorted within a few hours from my initial email enquiry on Rated People. All in all we were very pleased and would definitely recommend.

I would have no hesitation in using this tradesman again and would recommend him to anyone. Raymond turned up on time, his work was very good, he tidied up afterwards and was a pleasant person to do business with. Raymond clearly knows his stuff. The alarm now works.

Raymond rung to say he would be late because he was held up, & would it still be ok to come l said yes, he arrived before his estimated time & started work straight away, he checked the alarm battery & asked if it was ok to replace it, the whole alarm system was thoroughly checked, the cost of the work was as per estimate, we would use HSR Security & Raymond again.

Raymond was very pleasant and did a very good job of installing a door sensor.