Post your job for free, get up to 3 quotes

Post your job for free. Read reviews, get quotes, and see tips on hiring the right person.

How does it work?

This page has everything you’ll need to know about finding and hiring a window fitter or conservatory installer. Learn about this trade and how they can help you around the home.

Prompt response and completion. Good work. Some sound advice about future work and will be looking to use them again.

Experienced and a qualified builders based in sheffield area. We cover the whole of yorkshire  With over 9 years experience in the trade we pride ourselves on perfection & 5 STAR quality. We have the skills, knowledge and creativity to solve your site specific problems.  References available.   Please get in touch for a great reliable and professional service.

Andrea did an excellent job in installing brand new kitchen units into our utility room/garage. His workmanship, attention to detail and work ethic is second to none. On top of that we was extremely competitively priced and completed all work half a day ahead of schedule and he did a great job tidying up before he left. This guy is top notch??

I am really pleased with the excellent work that George has done in my kitchen and living room. I would definitely recommend him. My walls were really bad but now they are stunning, so happy how my rooms have turned out.

HELLO. MY NAME IS GRIGORE CHIS A MULTI TRADESMAN WITH MAIN TRADE CARPENTRY, JOINERY WHO WORKS IN PARTENERSHIP WITH 4 OTHER PROFESIONALS. WE COVER A LARGE RANGE OF TRADES LIKE CARPENTRY, ELECTRICITY, TILING, PLASTERING, PAINTING, PLUMBING.

Centiam is a business based in the heart of Glasgow servicing the people of Scotland.  Improving your home is simple with Centiam. We provide a bespoke service and we are supported by a network of manufacturers and suppliers working with you to create stylish products to improve your home. From initial design consultation to manufacturing and installation, our expert teams take care of it all, Centiam only offers the best of the best. Reliable in every way! We have 2 divisions within the company;  Roofing division specialise in; New roofs, roofline, flat roofing, lead work and Velux window installation. (Velux Registered Installers) Windows, doors and conservatory division specialise in; New replacement UPVC & timber windows, doors, conservatories and Equinox tiled roof.  Centiam's reputation for giving value for money and commitment to after sales service means that over 80% of new orders are through customer recommendation.  Our service is without hassle or sales pressure that is too frequently experienced with larger companies.  Why choose Centiam Home Improvements for your next project?  Local Company No Pressure Sales Outstanding Quality Competitive Price A Name You Can Trust The Majority of our Work Comes from Referrals from Happy Customers 10 Year Insurance Backed Guarantee Centiam are members of TRUSTMARK the Government Endorsed Quality Scheme covering work a consumer chooses to have carried out in or around their home. Get a FREE quote - Phone or video call consultations available now.

Work was very professional. Quick to give a quote and measure up. Very happy with work completed. Would use again

Superb operator . Very professional and took time out to explain the issue and actions . Sorted a huge wasp problem in no time

Hi My name is David, we are builders and we want to help you to make your dream come true.

London Development uk ltd is our company, we have been trading for over 12 years in the construction business. - We are a fully insured company with a big portfolio of jobs completed and we are friendly and reliable on any work and business that is coming across. - We can do big jobs as new buildings or full refurbishments, basements, extensions, lofts conversions etc and also we can do small jobs as bathroom refurbishments or even smaller is always space and time for a new job. - We guarantee you that you will get the best workmanship on your job with best skills and acknowledge in the construction industry, time effective and costly effective for customers. Try our company and you will gain the benefits!!!

Seriously so impressed by professionalism, work ethic, quality of work, expertise and advice when i was designing my bathroom. I really cant fault ANYTHING about Peter and his team. Very respectful with my home, they prepared the areas to limit the mess and then at the end of the job, they left the area clean and tidy. I would recommend this company to anyone, and i will definitely be using again - 5 STARS

Window fitters / Conservatory installers - what you need to know

Window fitters and conservatory installers help out with jobs involving windows and doors. They can get rid of your old ones and replace them. Working with different types of windows, they’re skilled at fitting your usual uPVC windows, wooden casement and wooden sash windows. They can also install skylight windows, whether that’s to give you some natural light above your kitchen dining table or to create a design feature that will flood your hallway with light and make it more welcoming to visitors.

What a window fitter or conservatory installer can help with 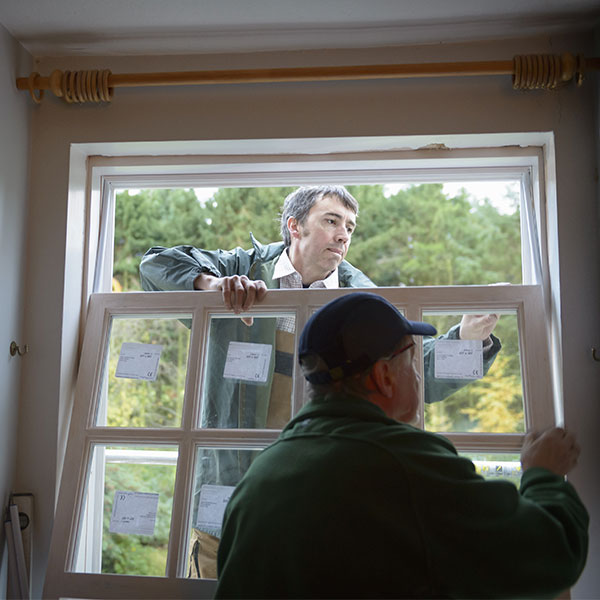 If your house is too cold and you haven’t thought about your windows in years, you might be losing a lot of heat through them. You can upgrade your glazing to trap the air between panes of glass. It’ll keep more heat inside your home and lower your heating bill at the end of the month.

For those dreaming about spending sunny afternoons reading in a conservatory, a conservatory fitter can help make that a reality. They’ll be able to tell you whether you’re best off building a conservatory or orangery and explain the difference between them so you’re certain that what you’re asking for will meet your expectations.

How does double glazing work?

Double glazing works by trapping air between two panes of glass with the gap being too small for the air to circulate. This creates an insulating barrier between the warm air inside and the cold air outside. There’s less heat lost through the window, keeping the room warmer. Double glazing is also a great sound barrier so you’ll hear less outside noise and passers-by will hear less noise coming from your home. 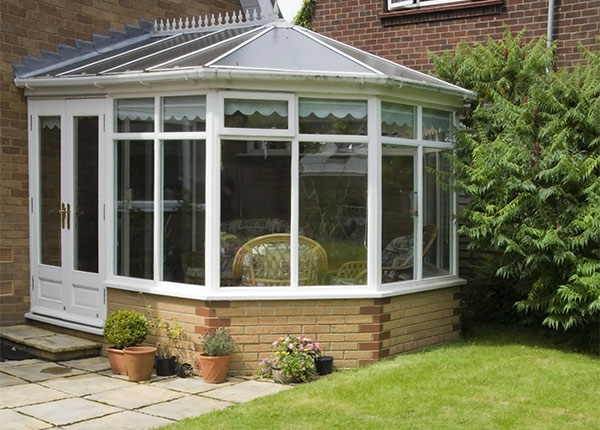 Should I build an orangery or conservatory?

Orangeries and conservatories are normally cheaper to build than single-storey extensions. The main difference between them is how the roof’s built and the brickwork. Orangeries tend to have less than 75% of their roofs glazed and solid brick walls. Conservatories normally have over 75% of the roof glazed and 50% of their walls glazed, using more glass. An orangery can cost more than a conservatory to build but the running costs of a conservatory are higher in the winter months because of the amount of glazing that’s used.

Planning permission won’t normally be needed but will be needed for conservatories and orangeries if:

For a full list of conservatory requirements, head to the Planning Portal.

You won’t need planning permission for roof lights or skylights as long as:

If you live in a listed building or you’re unsure if the work you’ve planned conforms to the rules above, you should contact your Local Planning Authority before carrying out any work as different rules may apply. 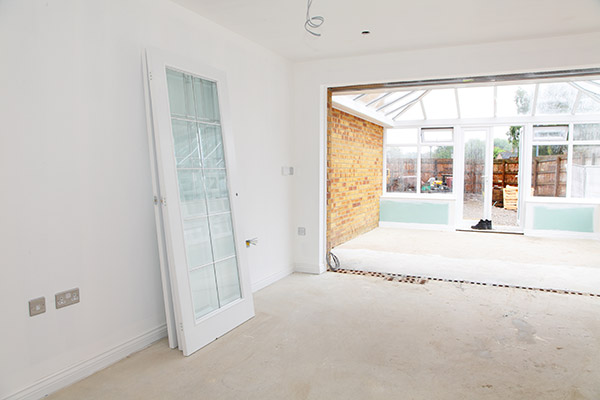 Building regulations will normally apply if you want to build an extension to your home. External windows, doors and skylights are classed as controlled fittings, so if you’re replacing them, they need to meet certain energy efficiency, means of escape and ventilation requirements. You can either make sure the tradesperson’s registered with a Competent Person Scheme like FENSA so they can self-certify the work meets the requirements, or if the tradesperson isn’t registered, you’ll need to ask for approval from an appropriate Building Control Body. Either way, you should ask for a certificate of compliance for the work.

Conservatories and orangeries are exempt from building regulations when:

You’ll need building regulations if you create a new opening between the conservatory and the house, or if you’re having your glazing replaced. It’s also forbidden to build a conservatory which limits ladder access to windows in roof or loft conversions, especially when the window’s an escape route in the case of a fire.

There’s no legal requirement for window fitters or conservatory installers to have insurance but it’s a good idea for them to have public liability insurance to cover themselves against any potential property damage and personal injury claims. 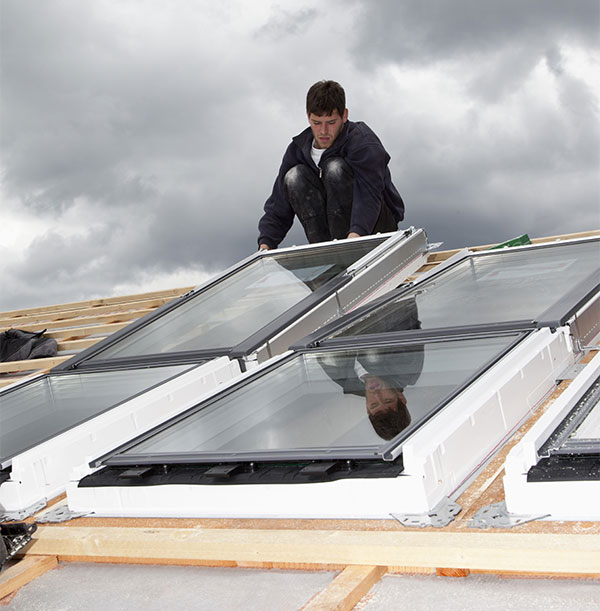 Questions you should ask a window fitter/conservatory installer

See the latest questions that homeowners have been asking window fitters and conservatory installers.

Expand your search to these areas in related locations

Here's what's been happening in and around your area

Hi Everyone, I have a very small crack and a hole at the bottom edge of my kitchen window. The window is a UPVC casement window which is double...

I would like a velux window fitted in my shower room. I have no window in that room.

repair damaged door and surround so that it will close correctly and lock.

I need to replace or repair a...

I need to replace or repair a toilet window. To match the existing windows in my house it needs to be of wood, having 6 panels with 'Georgian' glazing...

We have two wooden sash...

We have two wooden sash windows in the loft which are rotting on the bottom ledge. We would ideally like to repair them, but they might need to be...

I am looking for a modern...

I am looking for a modern conservatory. I would like brick walls each side with bifold across and a glass ceiling. It is a new build on the back of...

the double glazed unit in one...

the double glazed unit in one of our windows (104cm x 48cm )is fogged. We would like it replaced please.

I have 3 windows that need replacing: lounge, kitchen and bathroom.

Clean outside surround and top...

Clean outside surround and top of conservatory and all facia and guttering around a 2 bedroom semi.

We need the wooden window...

We need the wooden window casing/frame/whole window removing from our bay to get our sofa in to the living room and then put straight back. (Sofa...

Get our app for homeowners